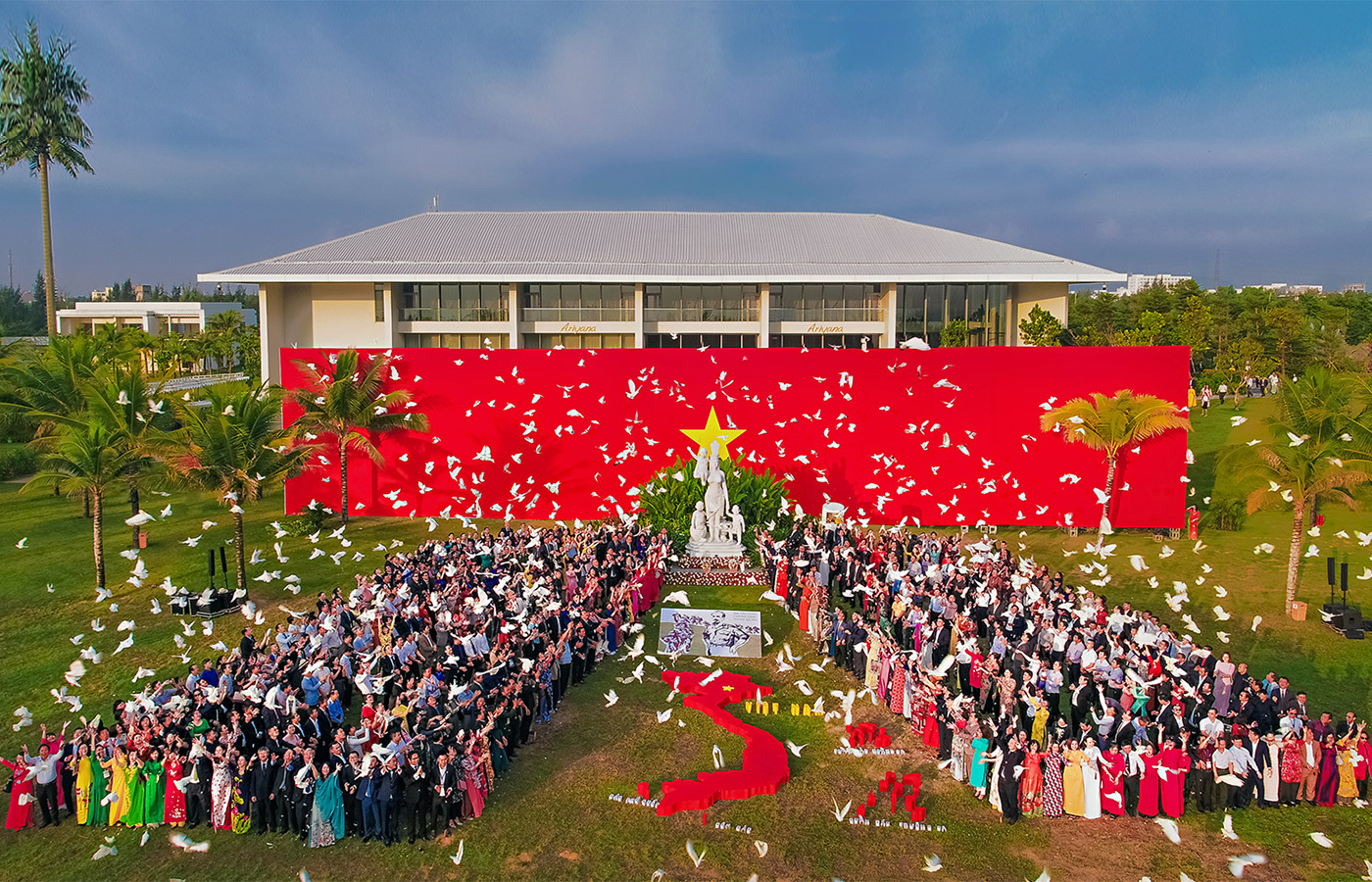 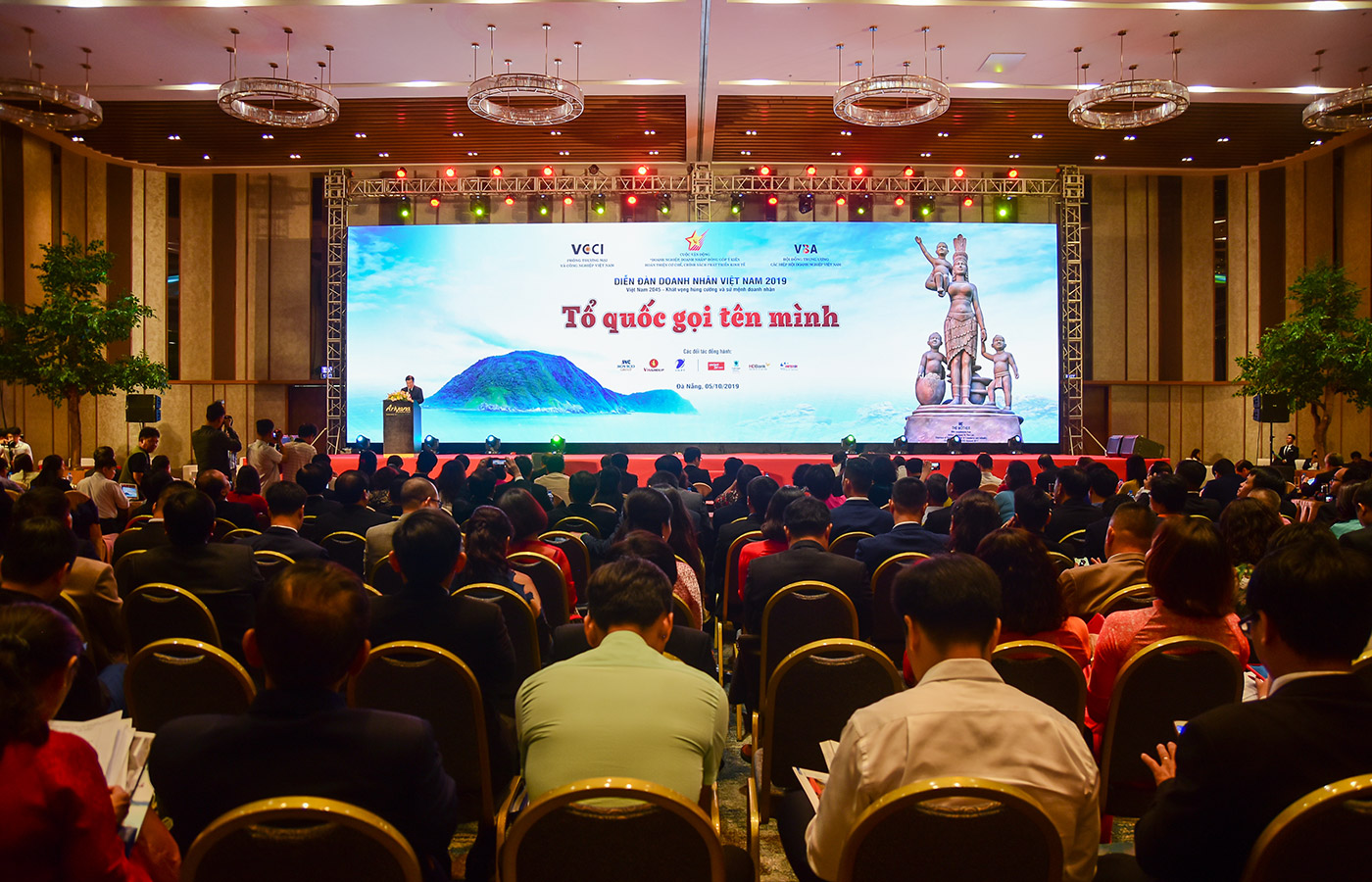 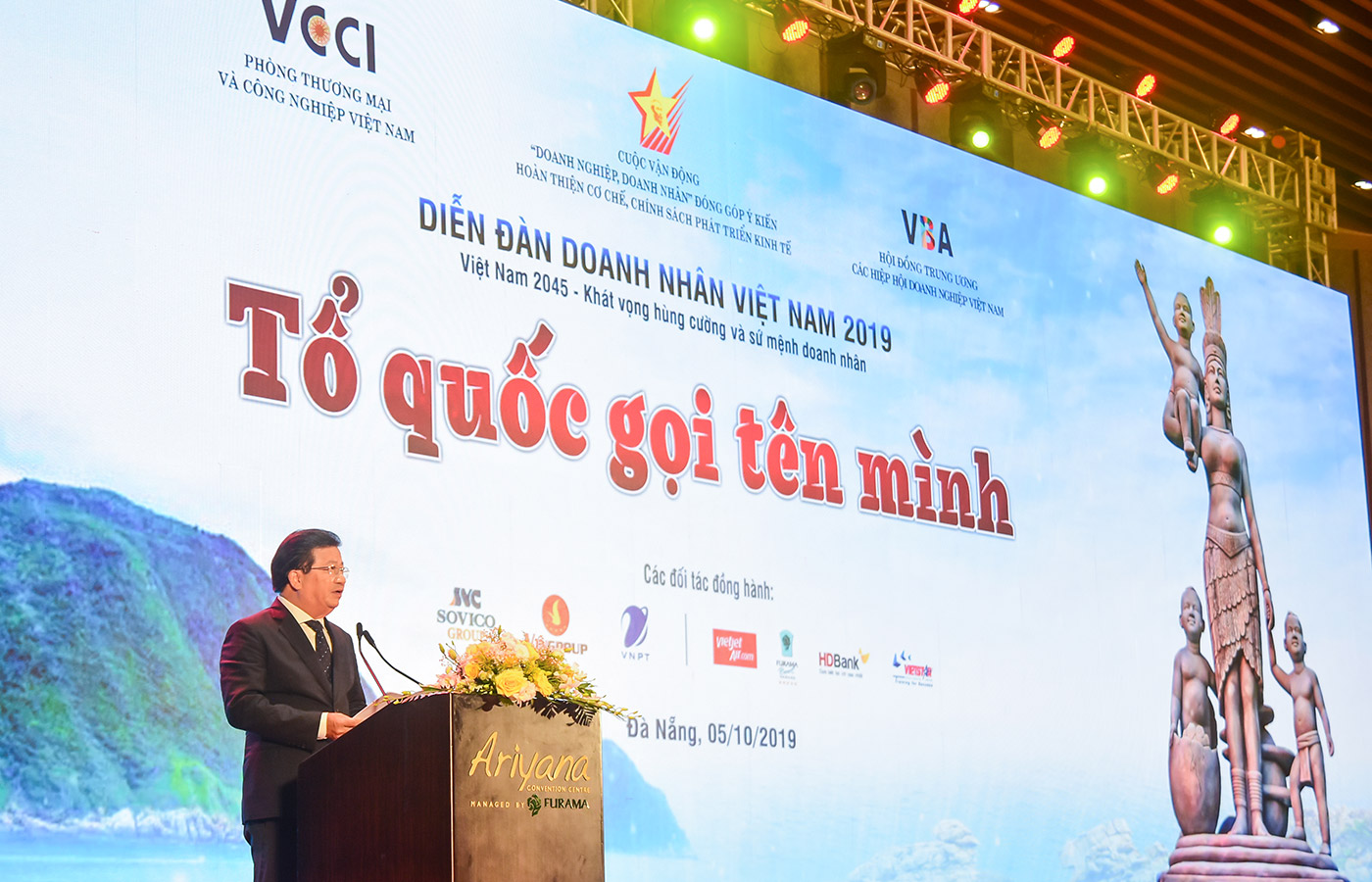 In the series of celebratory events for the 15th anniversary of Vietnam Entrepreneurs Day (October 13, 2004 – October 13, 2019), the Vietnam Chamber of Commerce and Industry (VCCI) hosted the Vietnam Entrepreneurs Forum 2019 – The fatherland calling you – themed “Vietnam 2045 – Aspiration to Become Powerful Nation and Entrepreneurs’ Mission” at Ariyana Convention Centre in Da Nang City on October 5, 2019. The event was attended by more than 1,000 entrepreneurs nationwide. Vietnam Business Forum Magazine would like to present the speech delivered to the forum by VCCI President Vu Tien Loc.

“Shortly after the National Day 74 years ago, upon hearing the news that entrepreneurs gathered and established the Nation-saving Industry and Commerce Federation and officially joined the Viet Minh Front, Uncle Ho wrote a letter of encouragement and exaltation to them on October 13, 1945. His letter, with less than 200 words, became the first document of our Party and State defining the role and mission of the business and business team. The letter said, “Private and public affairs always go together. The economic prosperity of the nation means the business prosperity of commercialists and industrialists.” He urged industrialists and commercialists to “quickly join the Nation-saving Industry – Commerce Federation and bring the capital together to make things good for the nation and good for the people.”

After more than seven decades, his affirmations about the roles of enterprises and entrepreneurs which enrich the country and his call for their quick investment for better wellbeing of the nation and the people are still of true value till today. Uncle Ho, you are still marching with us!

At the request of the VCCI President and business associations, in 2004, the late Prime Minister Phan Van Khai signed a decision adopting October 13 – the day Uncle Ho sent a letter to the Vietnamese industrialist and commercialist circle – as Vietnam Entrepreneurs Day. This can also be considered the birthdate of the Vietnamese business community in the new era. And, in just over a week, our young entrepreneurial force turns age 15.

Fifteen years since the day and, farther, more than three decades since the start of Doi Moi (renewal) initiated and led by the Party, Vietnamese entrepreneurs – so-called peacetime warriors – have made significant worthy contributions to lifting tens of millions of people out of poverty – one of the greatest escapes of poverty in the contemporary world, and are today standing before the mission of the vanguard army in the cause of constructing a strong and prosperous country on par with powerful countries across five continents.

In the current context, the strength and position of each nation depends primarily on economic power, and, on the economic front, enterprises and entrepreneurs are the primary striking force. Enterprises are the property of the nation and entrepreneurs are the talent of the nation.
The whole Party and the entire people are preparing for the 13th National Party Congress. This is the Party Congress of the vision to 2045, of the strategy to 2030, and of the development plan for 2021-2025 with high aspirations that Vietnam will complete industrialization, basically become a modern industrialized country by 2030 and become a developed country by 2045, exactly a century after gaining independence.

From the journey of “escaping poverty” to the journey of “escaping the middle-income trap” and “becoming rich” requires outstanding endeavors for better institutions, business environment and competitiveness. To “overcome the middle-income trap”, we must surmount the “middle (economic) institutional quality trap”. Businesses play a motivating role in this process. Businesspeople need to join hands with the Party and the State to reform institutions, improve the business environment, and enhance national competitiveness. The campaign “Enterprises and entrepreneurs contribute ideas to perfect institutions and policies”, launched by the Central Economic Commission, and dialogues and meetings launched by the National Assembly, the Government and the Prime Minister to capture opinions of enterprises, are valuable opportunities for entrepreneurs to raise their ideas and opinions to the Party and the State.

In response to this campaign, I suggest that business associations launch the movement “One enterprise/entrepreneur one initiative” to help improve economic institutional reform and perfect the business environment in Vietnam. At the same time, businesses must spare no effort to upgrade themselves, share and spread good experiences and good examples to grow sustainable and successfully compete for Vietnam. Institutional renovation and business upgrading must be twin tasks.

Vietnamese businesses must develop sustainably, be humane, conduct responsible business, and be innovative and creative at the same time.

We hope that the 13th National Party Congress will promote the second wave of reform to create an ecosystem for the boom of the next entrepreneur generation.

From the vision for a powerful Vietnam in 2045, we will discuss with each other the face of Vietnamese entrepreneurs in the next 25-30 years and recommend policies and essentials for entrepreneurs. “The fatherland calling you” is an order. Each entrepreneur must be part of national prosperity. They can’t be content with the “little dream” for their family and their business. “The prosperous national economy” must be the goal and destination of each entrepreneur, according to Uncle Ho’s teachings.

After a third of a century of Doi Moi, we have a large force of enterprises and entrepreneurs. We have not only more than 700,000 enterprises as defined by the Law on Enterprises, but over 5 million business households (including 1.6 million registered ones) as well. In the economic sense, they are business entities in the economy – and, they are defined as enterprises in market economies.

From this perspective, we can see that our ratio of businesses to population is not inferior to other market economies in the region. But, our business quality is indeed below the average of ASEAN. We already have top-class entrepreneurs who can compete with the world’s best performers, but we have too few of this class. We have highly competitive entrepreneurs but we do not have a generation of powerful entrepreneurs of world class. According to the ASEAN Corporate Governance Scorecard on listed companies, the most transparent business entities in an economy, we ranked last out of six ASEAN economies. According to the World Economic Forum (WEF) and the World Bank (WB), our business capacity is only ranked medium. Our labor productivity is not as high as that of other countries in the region.

Therefore, business upgrading is becoming an urgent requirement for Vietnam. The orientations and efforts of the national enterprise development program therefore need to focus not only on the number of businesses but, more importantly, on their quality in the economy.

We hope that this revised Law on Enterprises, submitted by the Government to the National Assembly, will promote this priority focus of the national enterprise development program, strengthen governance and promote business transparency and conditions upgrading, especially for micro, small and medium businesses.

We are also carrying out business support programs on the path to sustainable development by popularizing the Corporate Sustainability Index (CSI) and new business models: Circular economy, sharing economy and social enterprises, among others. These are also key activities of VCCI to carry out the Party’s resolutions and the Government’s action programs on business development, entrepreneurs and digital economy.

Promoting the valiant national spirit is the strength of Vietnamese entrepreneurs. We would like to extend our sincere gratitude to the Politburo for guidance and the Vietnam Fatherland Front for the launch of the “Buy Vietnamese” campaign, which both place fulcrums and supports for the Vietnamese business community. But, we also deeply understand that this campaign needs to be accompanied and responded with the “Vietnamese goods conquer Vietnamese people and the world” campaign initiated by the Prime Minister and VCCI.

Recently, as proposed by VCCI, the Prime Minister also launched the “Vietnam Productivity Movement” to fuel this campaign. We expect businesses to consider these campaigns as exemplary patriotic emulation movements of innovative entrepreneurs.

To promote entrepreneurship, we have also officially launched a song writing competition about businesses and entrepreneurs. I also formally request business associations and entrepreneurs to join hands with us to compile two important business books: “1001 stories of reform” and “1001 stories of entrepreneurship” featuring generations of Vietnamese businesspeople to hold the fire and pass it on their successors, contributing to building the country’s entrepreneurial philosophy and culture. We welcome the Vietnam Family Business Council, the CEO Club of the Key to Success and Alphabook, who are the first partners in developing these books and are looking forward to the joint cooperation of businessmen nationwide in this regard.

Vietnamese entrepreneurs are listening to what the country is calling, determined to devote all hearts and minds to the cause of building a prosperous and powerful Vietnam, as Uncle Ho longed for.

We deeply understand that prosperity is the way to bring happiness to the people and prosperity is also the source of power in the time of integration, the power that defends the peace and sovereignty of our beloved country.

May great success be with our entrepreneurs!”

On December 26th, 2020, Volvo Vietnam’s Customer Conference to launch Showroom Volvo Da Nang and A Fund – For a better Vietnam was held at Ariyana Convention Centre. 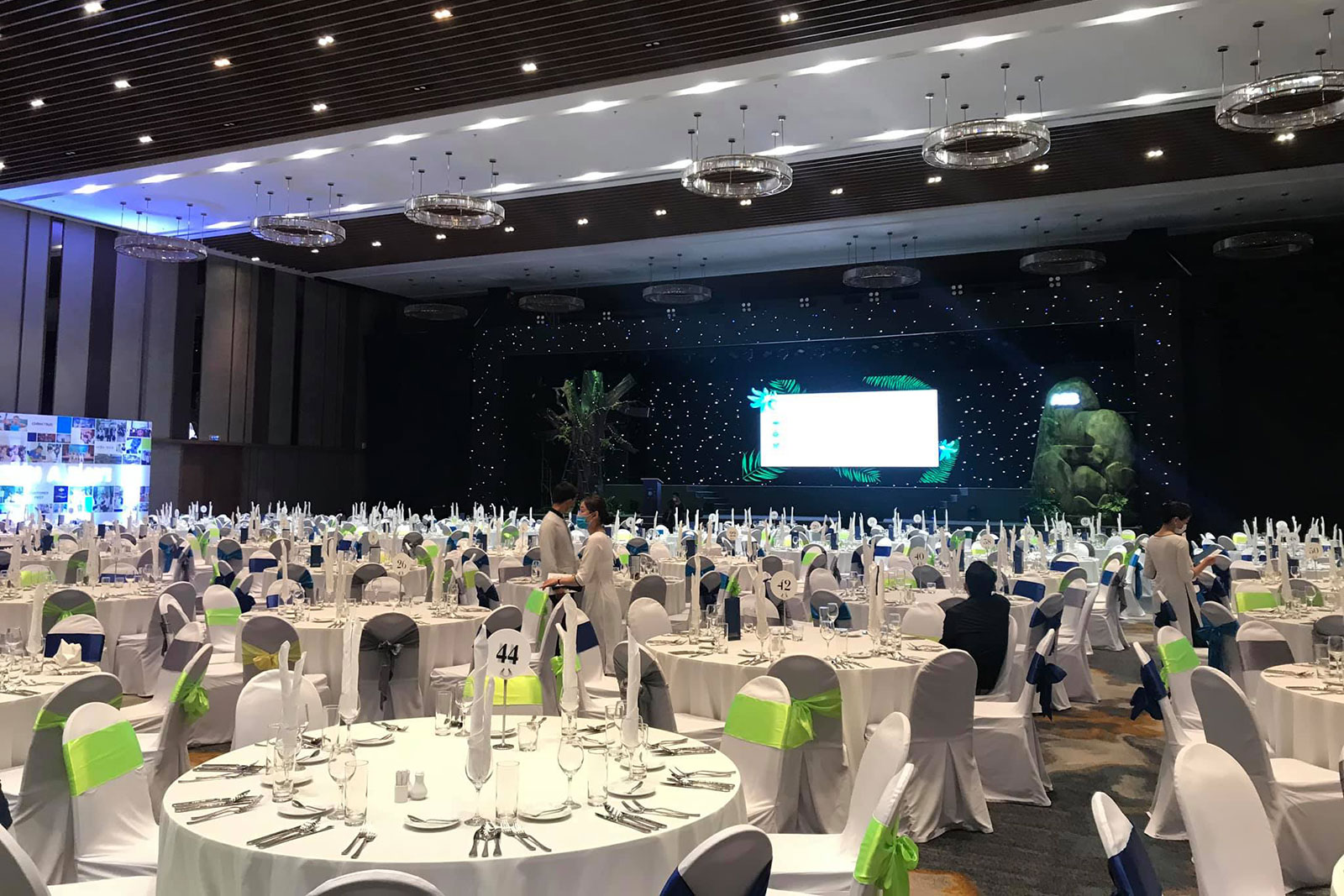 “INTO THE JUNGLE” GALA DINNER AND ACTIVATION DAY 2021

Ariyana Convention Centre was delighted to host 600 guests to attend Activation Day the Gala Dinner themed “JUNGLE NIGHT” at Ariyana Ballrooms where they had the chance to enjoy a tantalising International dinner prepared by Ariyana’s professional culinary team. 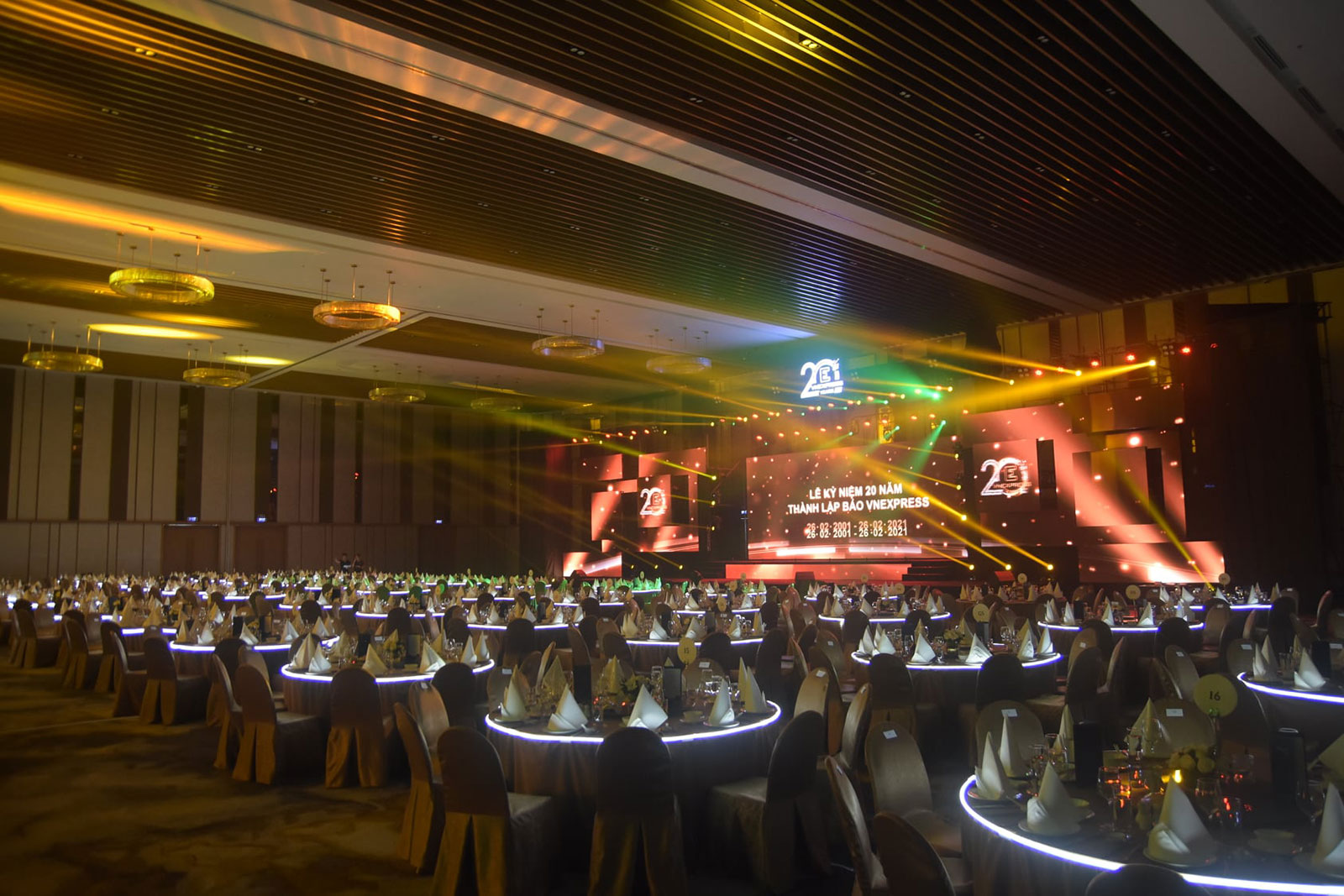 VnExpress celebrates its 20th anniversary on Friday with eyes facing towards the future with more than 600 guests. Such achievements were unthinkable for VnExpress founders at the time when the newspaper first got online on Feb. 26, 2001. 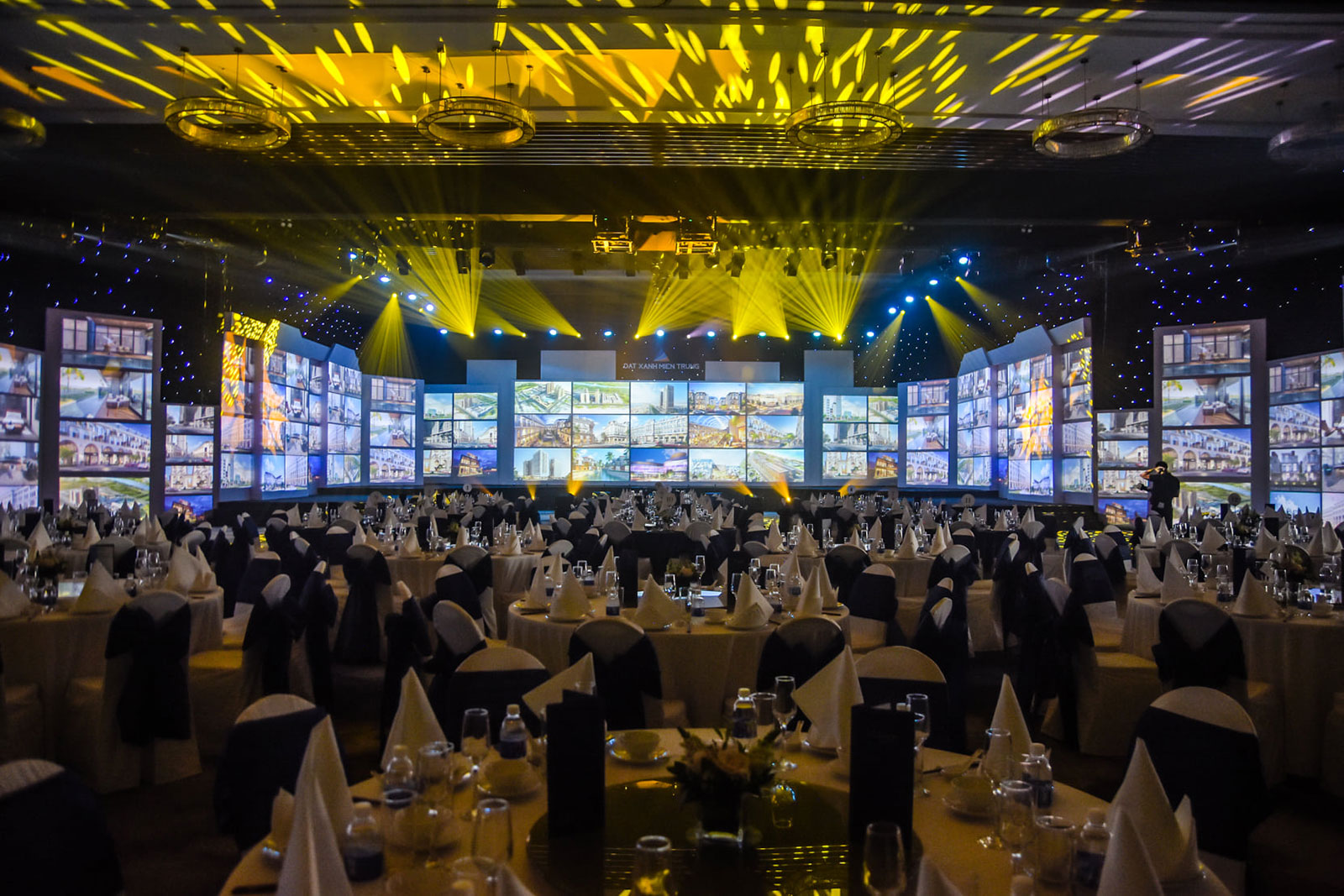 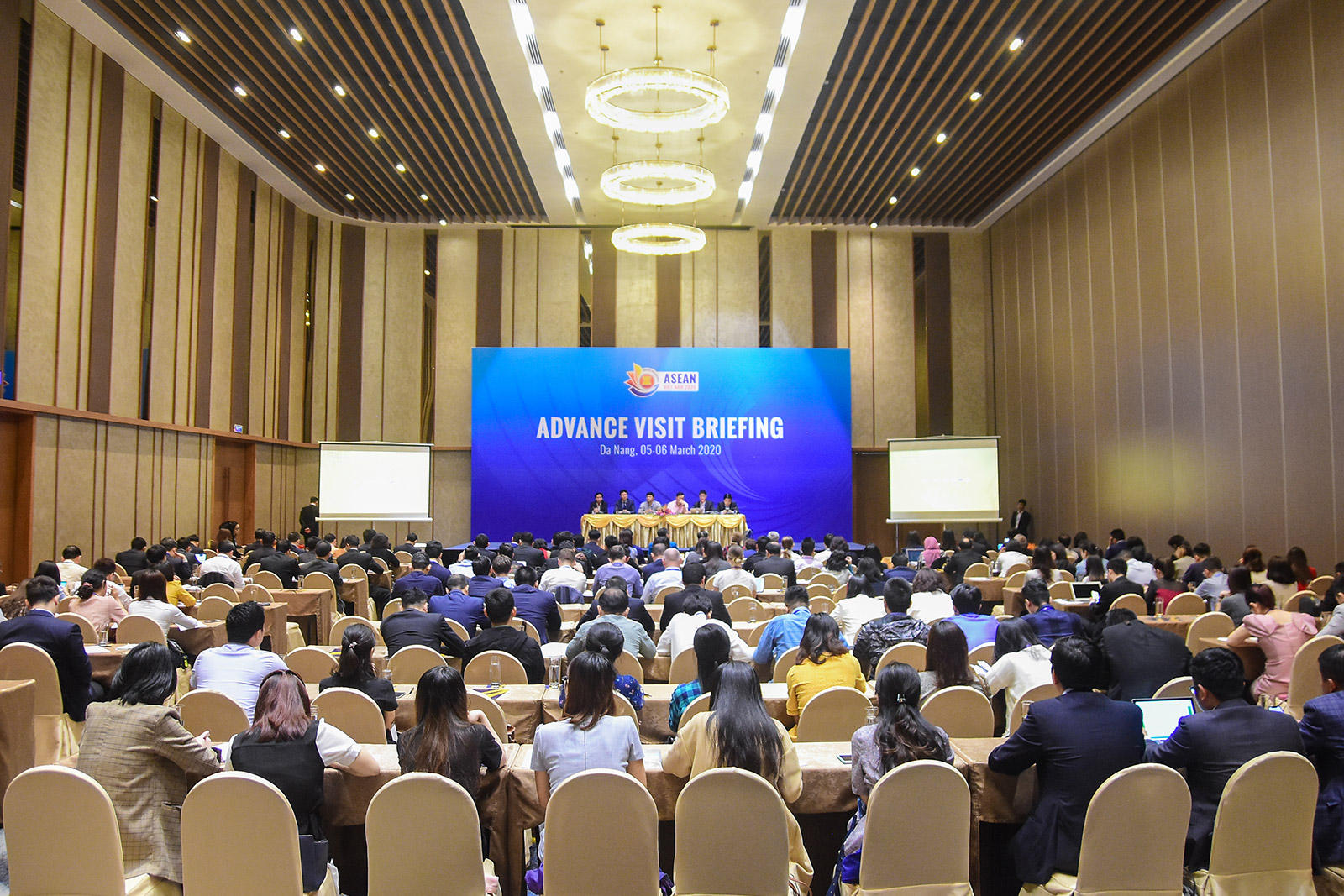 From March 5th - 6th, 2020 at Ariyana Convention Centre Danang, a delegation from ASEAN countries, New Zealand and the ASEAN 2020 National Committee inspected preparations for the 36th ASEAN Summit and the ASEAN-New Zealand Commemorative Summit in Danang 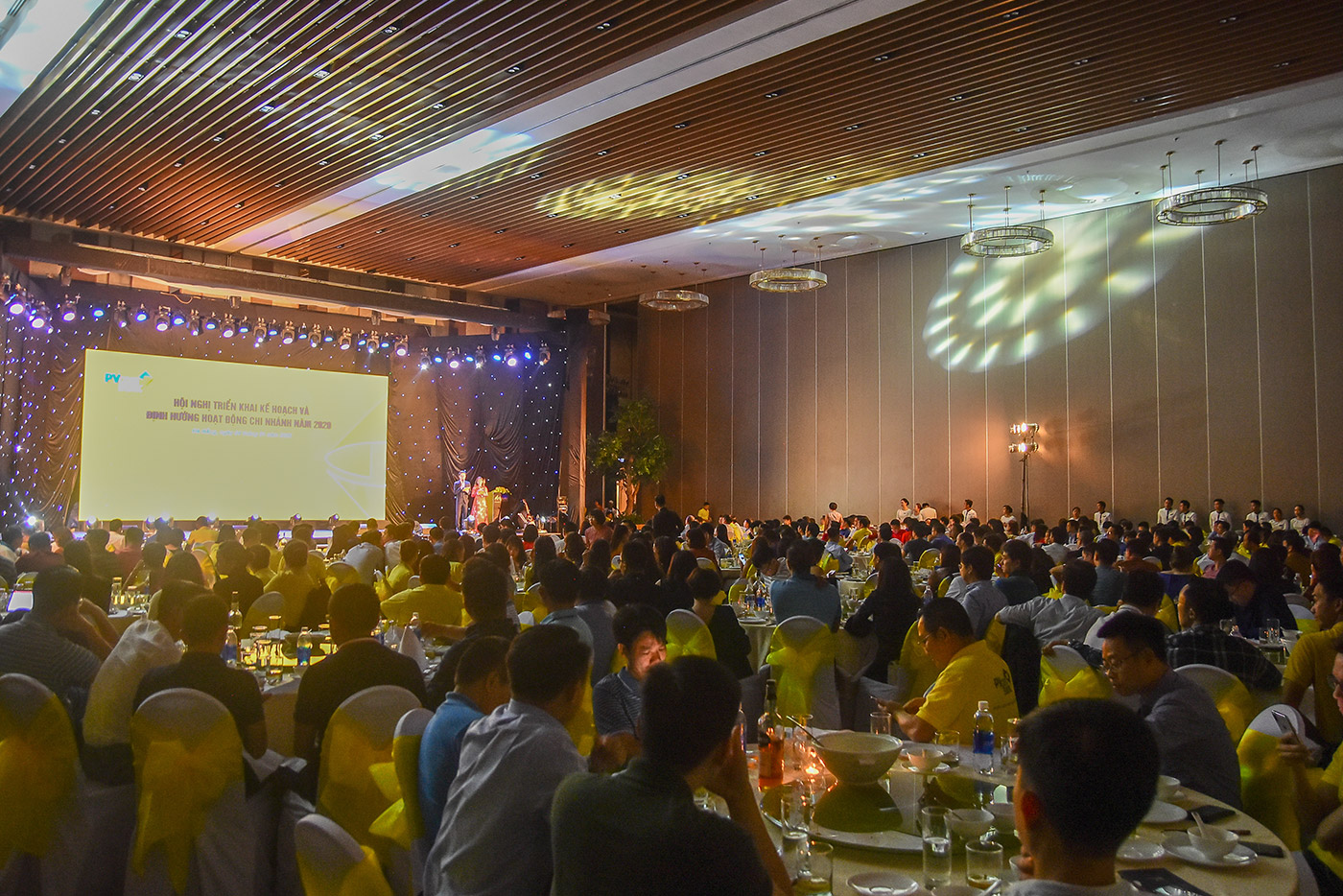 PVCOMBANK’S CONFERENCE ON BUSINESS PLAN AND ORIENTATION FOR 2020 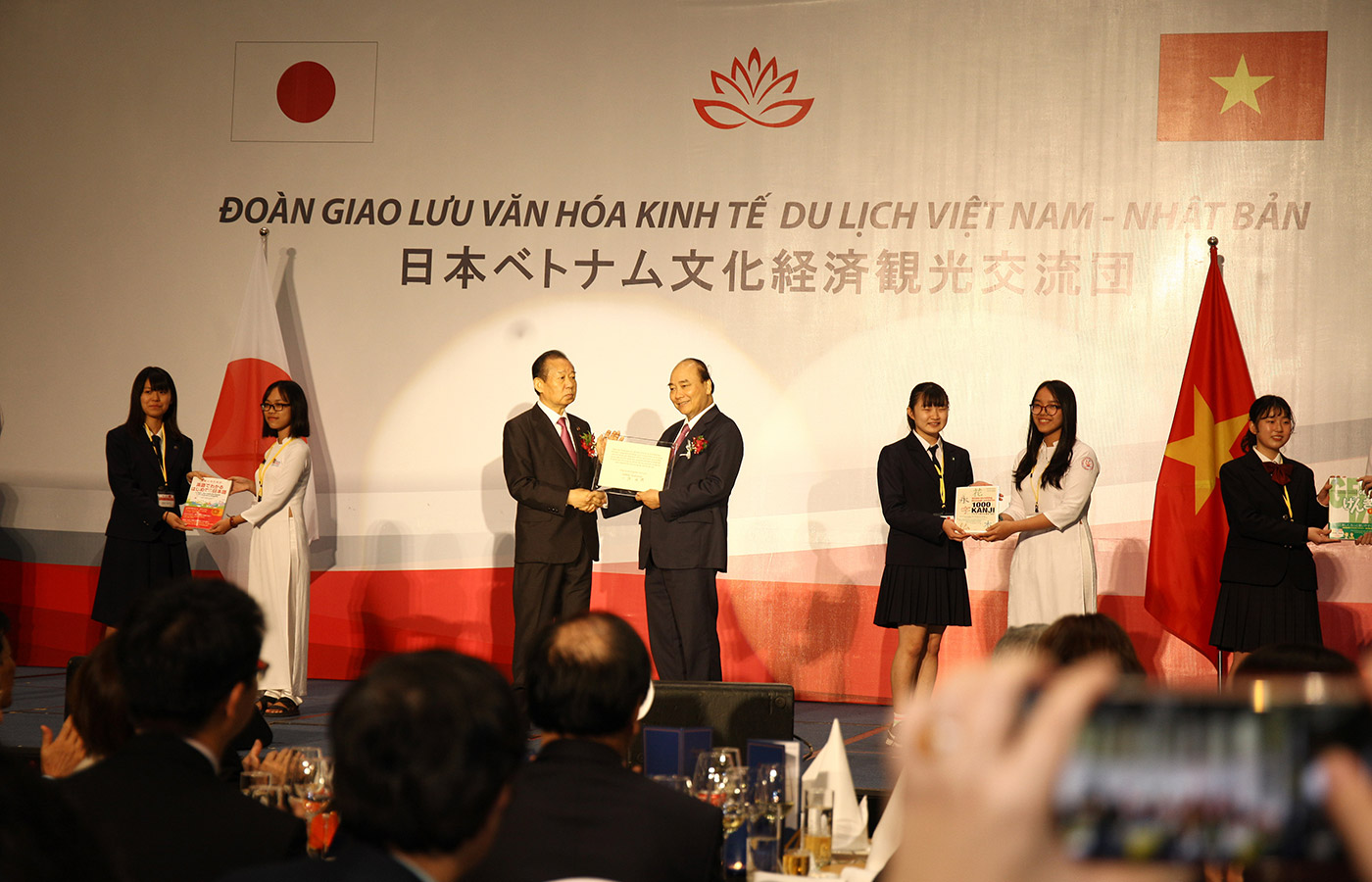 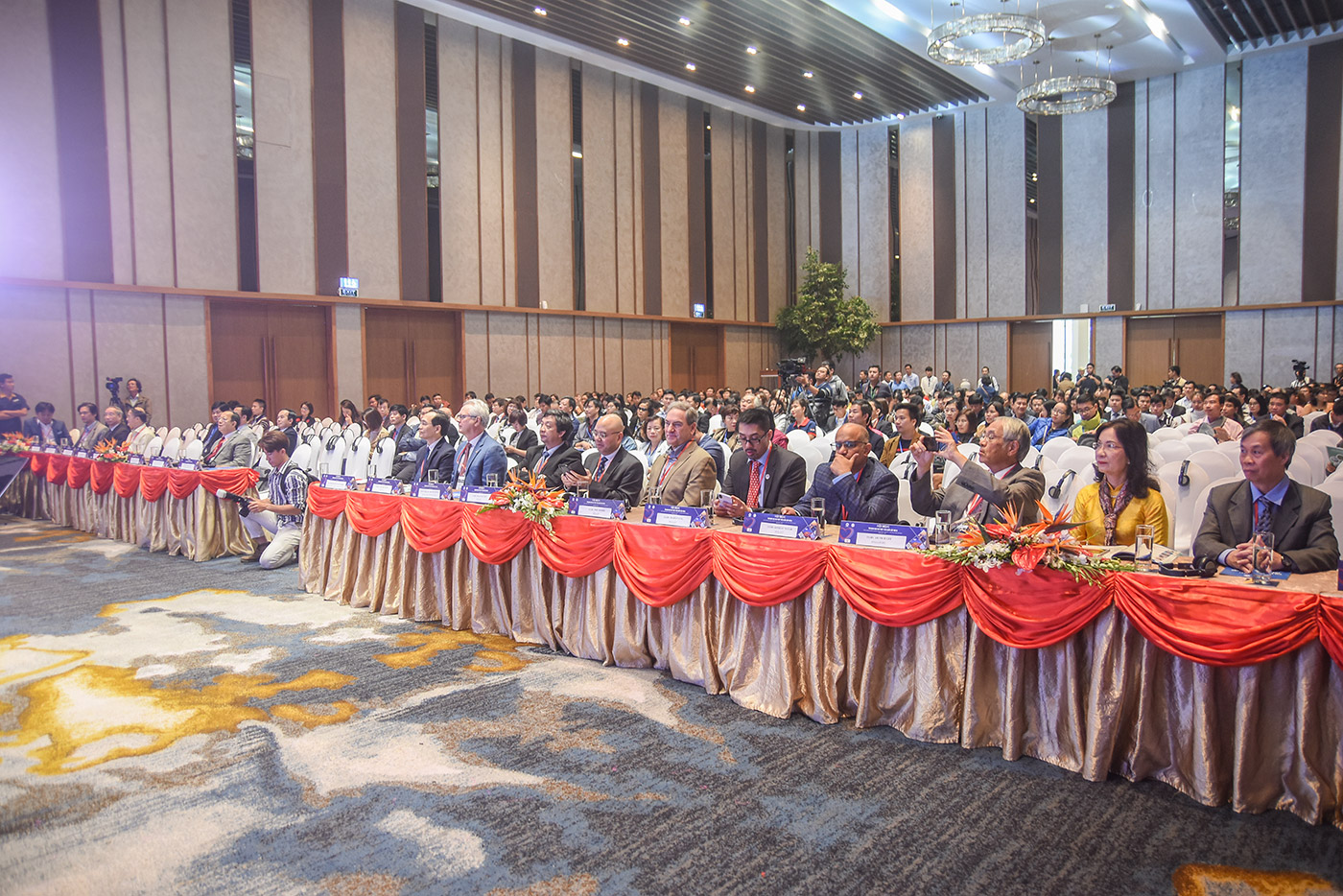 The 6th Vietnam National Congress of Interventional Cardiology (VNCIC 2019) has chosen Ariyana Convention Centre as their venue of choice. 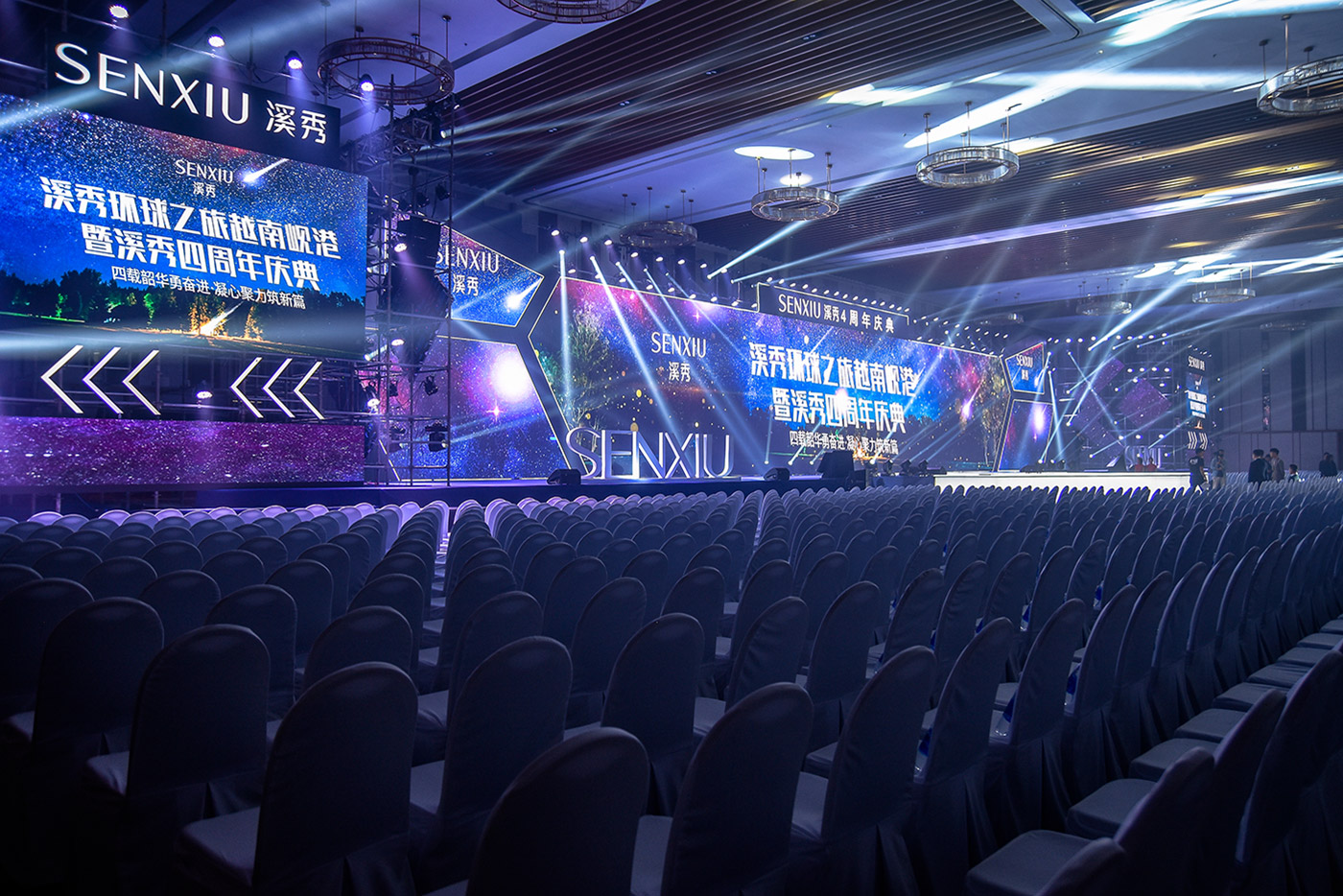 On December 10th 2019, Ariyana Convention Centre was proud to host 2,100 members from cosmetics company Senxiu to attend its four-year anniversary at our pillar-less Ariyana Grand Ballroom. 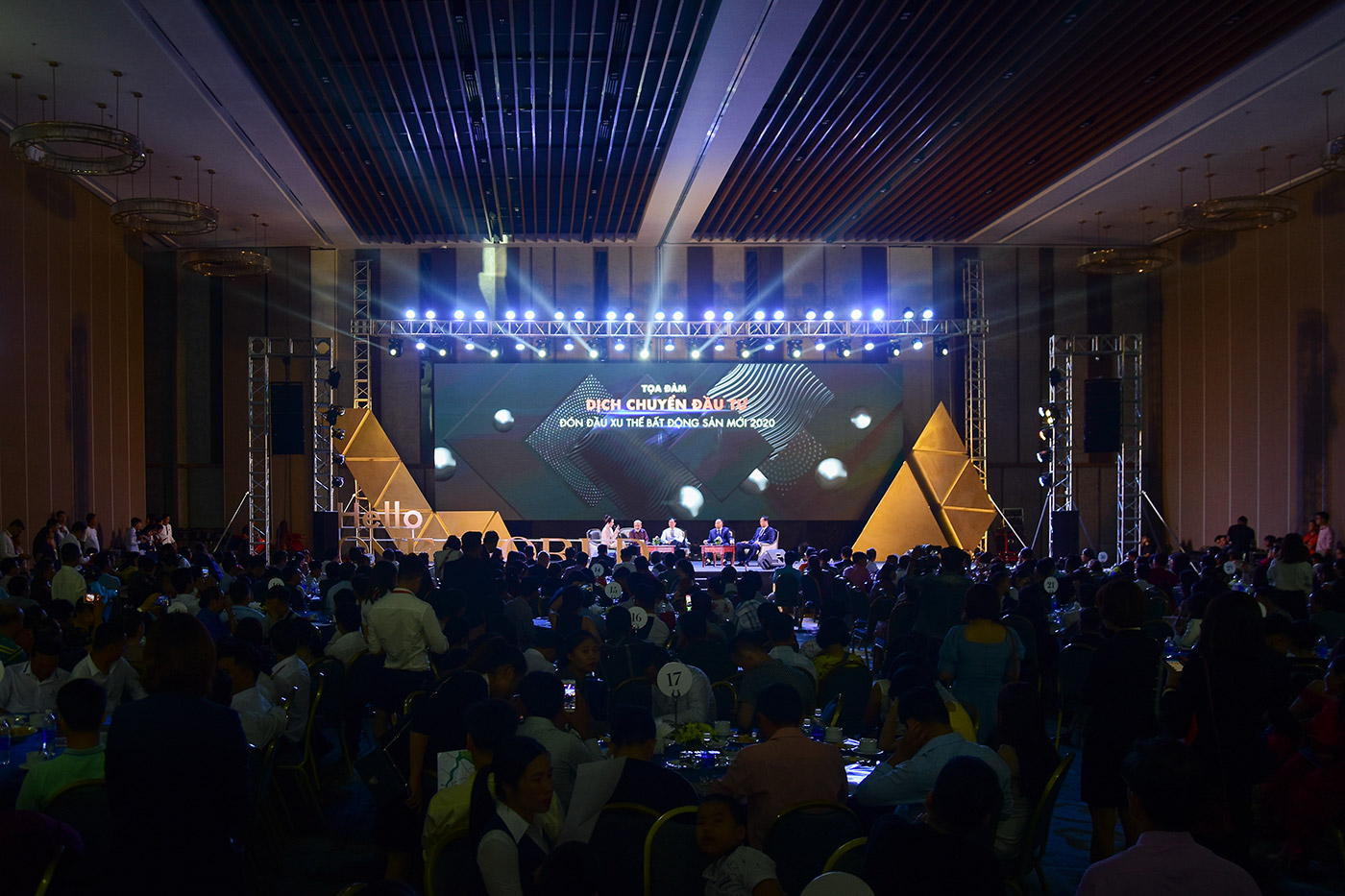 The Ariyana Convention Centre – ACC officially opens on September 2017, providing Vietnam with its first and only oceanfront convention and exhibition centre. Owned by Sovico Holdings and managed by Furama Resort Danang with over 20 years of experience, the ACC is conveniently located 14 minute from Danang’s centre, and features a flexible Grand Ballroom, a large exhibition foyer and six function rooms catering for up to 2,500 people.