Da Nang gears towards being smart and innovative city 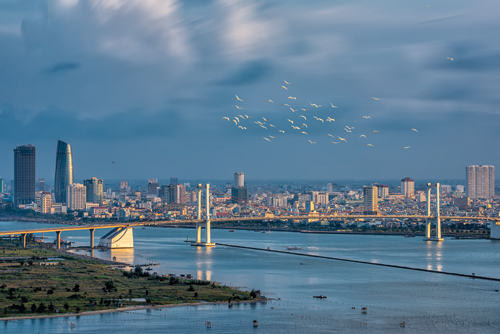 Da Nang gears towards being smart and innovative city

September 4, 2018   Ariyana Centre   Comments Off on Da Nang gears towards being smart and innovative city

Da Nang is one of Viet Nam’s pioneering localities in developing specific strategies for building ‘smart’ cities. Over recent years, the city has seen numerous positive results from the application of modern technologies in transportation and healthcare services, along with construction, education, environmental protection and other local aspects.

In the current context of the burgeoning fourth industrial revolution (Industry 4.0), Da Nang is accessing new opportunities to develop itself into an innovative city on the basis of information technology (IT) and hi-tech.

In 2012, the municipal government and the International Business Machines Corporation (IBM) jointly started the deployment of the smart city building project, with a focus on effectively applying ‘smart’ technologies in various aspects. It is common to see booming urban utilities in the city over recent years.

For instance, Danabus, an application for smartphones, was recently launched by the municipal Department of Transport. Operated by either IOS or Android systems, the app allows its users to monitor the travel schedules of local bus routes, and then find suitable buses.

Moreover, other positive results from the ongoing project include the installation of public surveillance cameras along some major streets in order to monitor and deal with traffic violations, and the automatic water quality monitoring system at the Cau Do (Red Bridge) Water Supply Plant.

In particular, healthcare and education have been developing into comprehensively smart aspects in order to enhance the efficiency of their practical applications and enhance the living conditions of local residents.

In July 2014, an e-government system was officially put into operation in the city with the application of the ‘one-stop-shop’ mechanism, and software on managing government employees and administrative dossiers.

In recent years, with the great support of domestic and international organisations, the city authorities have actively been involved in promoting the application of many urban development models such as such as ‘Smart City’, ‘Green City’, ‘Livable City’, ‘Eco City’ and ‘Low Carbon City’ for the sake of the city’s progress.

These advanced models are very useful for Da Nang to achieve its sustainable development target.

Under a master plan for its progress by 2030 with a vision towards 2045 in association with the city’s general planning structure, Da Nang strives to become a worth-living  modern-smart, global city with unique identity, and a start-up destination and international innovation hub of ASEAN in 2030 as well.

With regard to urban development, importance will be attached to developing the models of a ‘green urban space’ and a ‘compact city’, and efficiently exploit underground space to accelerate the urban 3-dimensional space development.

In the current context of rapidly changing world technology, it is high time for Da Nang to accelerate its smart city building process.

The statement was made by municipal People’s Committee (PC) Chairman Huynh Duc Tho at the signing ceremony of cooperation agreement, in August, between the PC and the Viet Nam Post and Telecommunications Group (VNPT) on turning Da Nang into an IT-dependent smart city for the 2018 – 2020 period.

At present, the inevitable trend in international urban management is to use artificial intelligence, big data, block chain. If Da Nang fails to meet these requirements, it will be quickly left further behind.